The bottle is opened in the presence of the guest who ordered the wine, and not standing or kneeling. This is done either on the table, if there is enough space (after obtaining permission from the guest), or on a specially brought folding table with a tray. If the bottle is taken out in a cooler, you can open it in it, but it is better not to open the wine in the cooler. If the bottle is served in the basket, it is opened in it. The bottle is placed in such a way that the guest can see the label. When opening the bottle, it is not customary to turn it around the axis, you can only tilt it slightly.

First, the excise stamp is removed from the bottle and the upper part of the shrink cap is removed. To do this, it is cut either along the middle part of the annular flow on the neck of the bottle, or – which is much more convenient – below it. Cutting the cap above the ring is not a mistake, but just a deviation from the canon. The cap should not be removed completely (this is possible only when decanting the wine), the appearance of the bottle will lose from this. 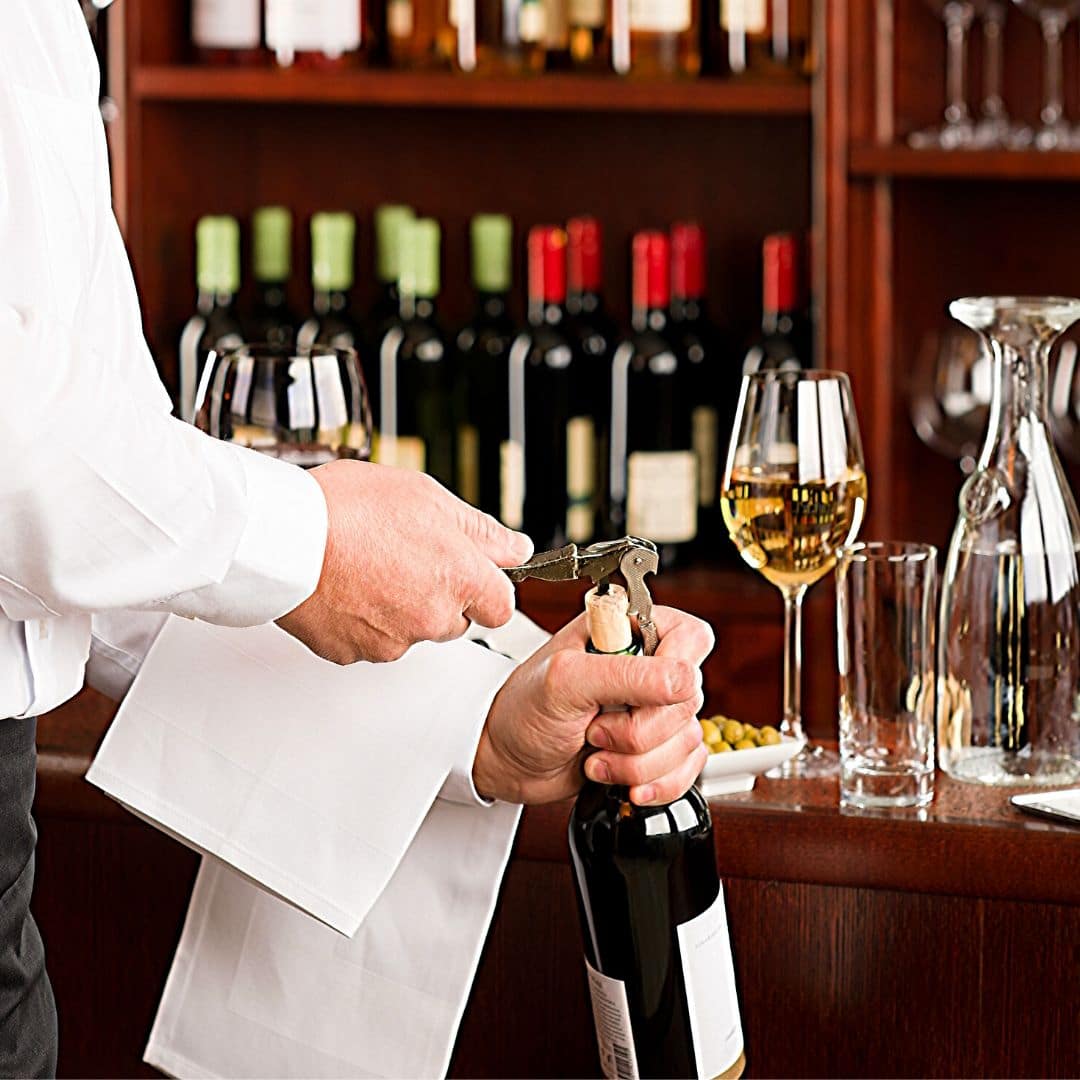 How to open wine

Next, you need to wipe the neck with a napkin, and then insert the corkscrew strictly along the axis of the jam. It is very important to go all the way through the cork, but not to pierce it through, because then its crumbs will inevitably get into the wine. Then the cork is carefully pulled out, but not all the way, but so that a part of it about half a centimeter long remains in the bottle. After that, you need to remove the cork by hand, trying to avoid loud bangs, smell it to make sure there are no unpleasant smells and carefully inspect it.

Traces of wine, especially red, always remain on the skin. They can rise to its middle and even higher, it is only important that they do not reach the upper edge anywhere. If this still happened, it means that the cork leaked and unwanted microorganisms could enter the bottle along with the air, which could spoil the wine. It also happens that the cork has leaked, and you find the opened wine in good condition. Everything depends on the stability of the wine itself.

However, it is not always possible to open the bottle without problems:

– if the cork “sticks” to the neck, you can try to heat the neck of the bottle under a stream of warm water;
– if the cork is broken, you should screw the corkscrew at an angle into the rest, trying to act carefully so as not to push it into the bottle. If this still happened, decanting becomes mandatory.
After removing the cork, the neck of the bottle (including the inside) is wiped with a napkin, then “wiped” with the side of the cork (optional) to remove the remaining villi.

The cork is placed in front of the guest or guests on a small plate or pierced with a special pin on a chain, which makes it possible to hang it on the neck of a bottle or decanter.

The sommelier pours some wine into his glass or a special bowl – “tasteven” – and quickly assesses its appearance, aroma (bouquet) and taste (suitability to type). If the wine is spoiled, the sommelier apologizes and brings another bottle. If the results of the tasting are satisfactory, he decants the wine, if necessary, and then gives it to the customer to taste.

Unlike a sommelier, a waiter does not taste wine. In this case, the good quality of the product is assessed by the guest himself, which significantly increases the likelihood of conflict situations. It should be borne in mind: the wine is offered for tasting to restaurant visitors so that they can express their opinion about its quality and serving temperature, and not according to their own taste.
When serving wine by a waiter, decanting, if necessary, is carried out after the guest expresses his approval.

After receiving the customer’s permission, the sommelier pours wine for the guests, usually starting with the ladies. The glass of the guest who ordered wine is always filled last. When pouring wine, the sommelier stands to the right of the guest and holds the bottle in his right hand. If he is forced to approach the guest on the left, the bottle (decanter) is transferred to the left hand.

The bottle should be held in such a way that, if possible, the label was visible to those sitting at the table. Do not twist the neck of the bottle with a napkin. The latter is held in the free hand in order to “pick up” a dripping drop if necessary. After filling the glass, the bottle with white wine is left in the cooler (it is better if it stands on a special stand), with red wine is left on the table.

Pour the wine not too often, so as not to seem intrusive, but also without waiting for the glass to empty. White wine is poured more often so that it does not get too hot in the glass. Pouring the amount of wine depends on the wishes of the guest.

After the bottle is empty, you should ask if the guests would like more wine. If there is only 1 bottle left of the offered wine, this should be mentioned at the beginning of the service. When re-ordering, even if the guests request the same wine as the first time, the glasses of everyone sitting at the table are changed. Pouring wine from different bottles into a glass is unacceptable.